Each week the AIT community receives #TakeActionTuesday with tips for creating impactful change in their community and beyond. From new online tools, to pending policy updates, subscribe today to make sure you don’t miss these action-oriented recommendations.

A measure to reauthorize the Violence Against Women Act (VAWA) was introduced in the U.S. House of Representatives on Thursday. After returning from August recess, the House will have just over three weeks to vote on the bill’s reauthorization before VAWA is set to expire on September 30. If passed, the reauthorization measure would keep the legislation intact for another five years. 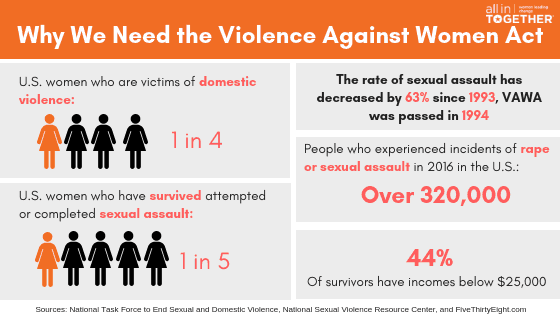 First passed in 1994, VAWA served as the first comprehensive piece of federal legislation designed to end violence against women. The legislative package recognizes and addresses the severity of gender-based violence and crimes such as domestic violence, dating violence, sexual assault, and stalking, primarily by providing grants to organizations and law enforcement programs that combat and address gender-based violence. The new version of the bill includes additional measures such as expanded housing protections for survivors and the creation of a Violence Against Women director position within the Department of Housing and Urban Development (HUD).

This #TakeActionTuesday, contact your Representatives and share your opinion on the Violence Against Women Act’s upcoming reauthorization.

Here are some helpful tips to ensure that you are maximizing your impact when contacting your Representatives: