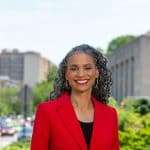 Maya Wiley is the president and CEO of The Leadership Conference on Civil and Human Rights and The Leadership Conference Education Fund. A nationally respected civil rights attorney, Wiley has been a litigator at the ACLU, NAACP Legal Defense Fund, Inc., and the US Attorney’s Office for the Southern District of New York. She has been a program creator in philanthropy, non-profits, government, and higher education. She helped create a criminal justice program for a major foundation in South Africa. Wiley co-founded and led a national policy advocacy organization, the Center for Social Inclusion, now a part of Race Forward, a national policy strategy organization working to end structural racism. She became the first Black woman to be Counsel to a New York City Mayor, Bill de Blasio, where she worked to protect and expand civil rights, Minority and Women-Owned Business contracts and broadband access. Wiley became a Senior Vice President for Social Justice at the New School University, where she also founded the Digital Equity Laboratory. While there, she chaired the New York City Civilian Complaint Review Board (CCRB). As chair, she led the release of the “hold” on proceedings against Daniel Pantaleo whose illegal chokehold killed Eric Garner, and Co-Chaired the Mayor’s School Diversity Advisory Group that authored two major reports on integrating New York City public schools. Wiley has received numerous awards, and has been a public voice for rights, justice, and democracy, through written opinion editorials and as a legal analyst for NBC News and MSNBC.