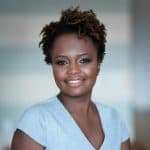 Karine Jean-Pierre is the current White House Press Secretary under the Biden-Harris Administration, a promotion from her previous appointment of Principal Deputy Press Secretary this past May. Jean-Pierre was Senior Advisor to President-Elect Joe Biden and Chief of Staff to Vice President-Elect Kamala Harris on the Biden-Harris Campaign. Prior to her role on the campaign, she served as Chief Public Affairs Officer for MoveOn.org and an NBC and MSNBC Political Analyst. Jean-Pierre served as Regional Political Director for the White House Office of Political Affairs during the Obama-Biden administration and as Deputy Battleground States Director for President Obama’s 2012 re-election campaign. She served as Southeast Regional Political Director for President Obama’s 2008 campaign, Deputy Campaign Manager for Martin O’Malley for President, Campaign Manager for the ACLU’s Reproductive Freedom Initiative, and Deputy Chief of Staff and Director of Legislative and Budget Affairs for two members in the New York City Council. Previously, she worked at the Center for Community and Corporate Ethics, pushing major companies to change their business practices. Born in Martinique and raised in New York, Jean-Pierre is a graduate of Columbia University.