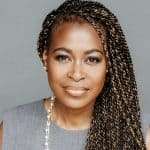 Errin Haines is editor at large and a founding mother of The 19th, a nonprofit, independent newsroom focused on the intersection of gender, politics and policy. She is also an MSNBC Contributor.

Prior to joining The 19th, Errin was national writer on race and ethnicity for The Associated Press. She has also worked at The Washington Post, the Los Angeles Times and Orlando Sentinel.

Errin’s expertise on issues of race, gender and politics make her a sought-after voice and thought leader in her industry. She has taught classes on race, gender and the 2020 election at the Georgetown University Institute of Politics and Princeton University.

Errin is currently writing her first book, TWICE AS GOOD, exploring the growth of Black women’s power and leadership through Vice President Kamala Harris’ historic ascent and the rise of other notable trailblazers boldly asserting their roles in American democracy and society.

A native of Atlanta, Errin is based in Philadelphia