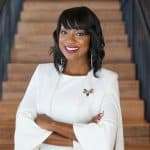 Charmion Kinder is a master communicator, social impact advocate and corporate responsibility strategist with two decades of experience promoting transformational change for the next generation of American leadership. She’s founder of CNKinder, Inc., a social impact accelerator and SVP of Social Impact at Values Partnerships – which is the nation’s largest Black-owned social impact agency. And together, they work hard to solve big challenges, launch new projects and expand the common good.

Charmion’s work as a change agent began after graduating from Howard University, where her efforts to inspire 21st century ingenuity have since promoted global responsibility, civic engagement, and diversity and inclusion, for the purposes of building a better world.