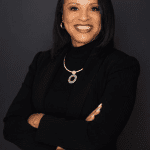 As the leader for Merck’s Global Diversity and Inclusion Center of Excellence, she is responsible for working with Merck’s global leaders to advance and embed diversity and inclusion as a strategic approach to maximize business performance and create a competitive advantage.

Prior to joining Merck in 1997, Celeste worked for nine years in Human Resources at Kraft Foods, Inc. and General Foods and held several positions of increasing responsibility including such roles as Training & Development Leader, Diversity leader, Labor Relations Director and Human Resources Leader for several organizations within Kraft and General Foods.

Celeste attended the University of Kentucky where she earned her B.S. degree. She received her Masters Degree from Carnegie Mellon University.

She is the wife of John Warren and the mother of two children, Christina-Celeste and John Steven, Jr.